Karete and Ki The Depth of Thought 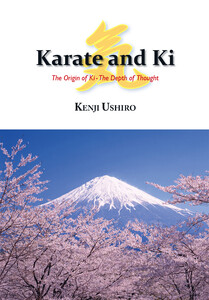 What is “Ki”? How you can make it yours?―― It is in “the depth of thought.”Ushiro Shihan has been teaching and coaching a great number of people all over the world using his original method of “Ki” that maximizes our potential ability.Karate and Ki was published in Japanese in June of 2007 and has been highly acclaimed not only Budo readers but also by the Japanese public. “Karate and Ki” is a milestone of life， many readers say.We are very honored to present Ushiro shihan’s point of view and thoughts to an audience not limited only to Japan but on worldwide scales through the English translation of Karate and Ki.The text has been translated as faithfully as possible from the Japanese version and many new photos have been specially added to this English publication.This book consists of 2 parts:The first part explains in detail the principle and theory of “Ki”， which is the ultimate form of martial arts Karate.The second explores Mr. Ushiro’s “no compromise” thought and philosophy which he developed through his life as a martial artist， electronic engineer and top corporate executive.The “Ki” that Mr.Ushiro describes in this book is totally different from the “Ki” normally thought of in the traditional martial arts and regular world.It is an energy that everyone has， the vitality of people’s life.It is the source of everything that supports work， family and daily life.This book has attracted many readers who have read it multiple times and derive new energy from it with every read.Some comments from readers include: “This book is like a mass of energy.” “It was moving and gave me the courage to move forward”.